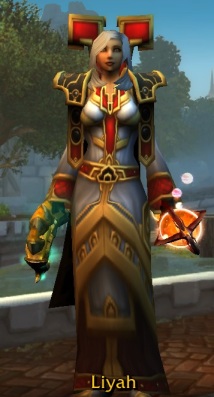 I realize that I’ve missed Priest week, but figured since I had the time I’d sit down and try to write the entry.  My priest has been one of my two primary alts for the last couple of expansions.  I initially tried to level her whilst we were in Naxx 25 and needed priests for Mind Controls for one of the fights in there.  With half your healing corps priests and only one or two shadow priests, we needed more.  I leveled her to level 30 as shadow and then swapped to disc.  She’s been disc since that point in time.  She used to be Kintara on Thorium Brotherhood but had to swap to Liyah over here on Azuremyst.

I actually have two other priests.  One is Fundamental over on Argent Dawn.  I had originally intended to level her something else besides discipline… shadow and holy are the only two specs I haven’t even really dabbled in, but she ended up being what I know – which is disc. 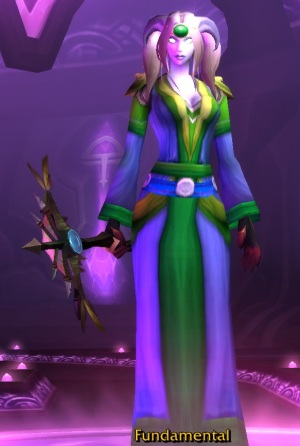 The last priest is Dedication back on Thorium Brotherhood.  I leveled her because a dwarf priest was the last combo we needed for the Stay Classy achievement back in WaR.  Sadly she’ll probably stay put at 85 for now.  She’s also discipline… because I was in a hurry to level her and didn’t want to take the time to experiment. 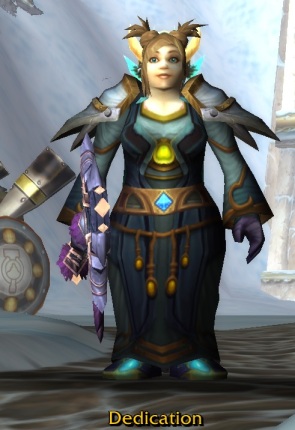 Oh I know some people play them and play them well.  I am not one of them.  Rogues have never suited me.  By some miracle, I do have a max level one… just finished leveling her before the patch.  Yeah I was THAT rogue pulling 20k dps on Coren Direbrew…  And sadly I was happy with that…   I was bad enough that I don’t believe I dungeoned at all leveling her from 85-90.  It’s one thing to be just learning but my dps is BAD.  I got the Rogue Rotation Helper addon and that helped some.

Anyway in the interest of giving rogues another shot and to maybe try some lowbie PVP since everyone says it’s so great [not a big PVP fan myself], I do have a lowbie rogue… a panda rogue…I will say the panda combat animations are COOL.  And she looks kinda like she’s gonna kick some butt and take some names…

Raid leader and Tank. Also is an altoholic View all posts by Askevar