Week at the beach felt good though

I highly recommend doing the Children’s Week quests.  They have a new reward – the Pet Care Package which includes a lot of Pet items, including a Flawless Battle Stone… whether you want to sell it or use it yourself, it’s worth the 30 minutes or less!

Also, don’t forget the new holiday toy – the Green Balloon – which I got from the Toy Vendor in Stormwind – the gnome who walks around with the cart.  I presume the equivalent in Orgrimmar would sell it for the horde.

I started the New Year with the determination to blog regularly.  Draenor hasn’t been particularly conducive to regular blogging for me… add in moving to our new house [yes we bought one] and hubby having a cracked rib for that process and the unpacking and it sorta occupied my time.

My game time is nothing revolutionary either.  If I’m not raiding, it’s garrison chores [just cooldowns/mission rotation] or old raids, though I have done a few bursts of achievementing as well and I’ve now got 10 max level toons – 2 DKs [including my main], 2 pallies, 2 druids, a shaman, a monk, a hunter, and a warlock.  Most are fairly geared now too – between caches and 645 items from garrison missions.

Compared to other expansions, I’m not satisfied with this one.  I mean, yes, there’s plenty to do but the motivation to do a lot of it is just gone.  I know I’ll eventually max the reps… but there’s no framework to work within on them, so it’s a mindless, boring grind – the kind I hate the most so maybe they’ll eventually add something in to help with it?  I don’t know.  I have Arrakoa, Steamwheedle Preservation and Exarchs maxed already… but the rest can wait.  If hubby ever gets the notion to go grinding, I’ll go with.  He’s one that can enjoy that type of rep grind… throw up netflix on the other monitor and go.  So, I’ll just tag along if and when he gets the motivation.

And hey, if/when I get the mounts from Ulduar and Heroic Deathwing, I’ll have all the Pre-MoP raid mounts… so that’ll be checked off my list.  I did enjoy Raiding With Leashes 3.  I went after that with a vengeance.  I enjoy soloing old content so that chase was a lot of fun,  Not sure I have the fortitude for the Poundfist/Other Rare Mount waits.

As I predicted, and as I knew, I miss dailies and I’m not alone there.  I like a firm start and stop to a rep grind.  The gold didn’t hurt there either, though I’m not really hurting in that department this expansion.

I’m far from ready to give up on the game now.  I enjoy the raid team we’ve got and I want to love the game but there need to be some changes made.  I fear too long on this path and they will alienate that base of people who don’t unsub between content.  Those types who have been here in the droughts before and who keep finding something to do and something to love in game.  I’m seeing anecdotal evidence that they are going down that path just based on talking to people and reading some blogs.

What’s the core of the problem?  I don’t know exactly.  It’s not as simple as “no flight” or “no dailies”, though both of those would improve my QoL in game.  I’m that person who always flew around and explored every nook and cranny… loved old Nagrand for that.  And I did dailies after exalted when I felt like it.  Maybe it’s simply a perception problem – WoD has always felt like an expansion taking out a lot of content.  Some other bloggers have said it lacks lore, soul, or purpose.    Maybe it’s the whole Grind and RNG aspects… some of each is good but pure grind with no benchmarks and seemingly endless RNG aspects aren’t fun.  RNG has it’s place but instead of gating things behind multiple reps like people complained about in MoP, it now seems like things are gated behind endless RNG loops… and there could be no end to that unlike the reps.

Incidently, I rediscovered Diablo 3 the other week, so I may work on that again since Season 3 has started.  I really enjoyed the adventure mode with bounties.

I pledged on a community to write 500k words this year… that can include both fiction and nonfiction that are not work related but are intended to be published at some point – so both my blog writing and my fiction writing can count!  Hopefully that will also rejuvenate this blog to a degree.  That’s an average of 1370 words a day though I tend to write in splurges so no idea what that will end up translating into.

END_OF_DOCUMENT_TOKEN_TO_BE_REPLACED 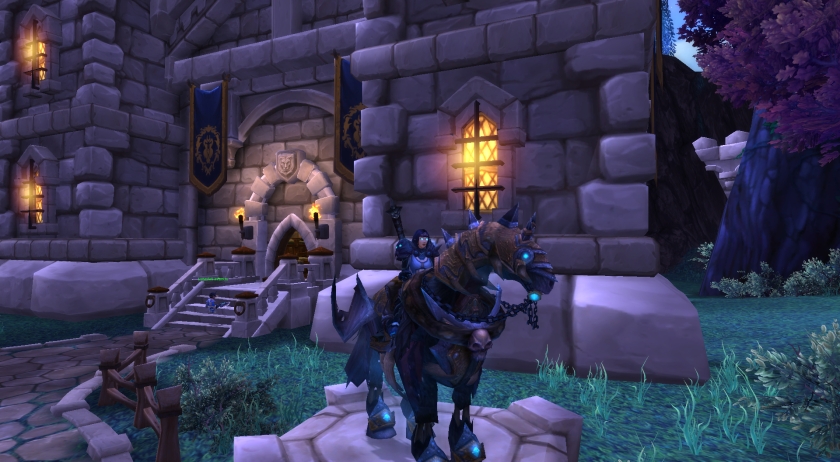 Well since it’s the end of the expansion, this is of course the time wherein a lot of people scramble to finish long outstanding achievements.  I’ve actually managed to finish several the last few weeks.

END_OF_DOCUMENT_TOKEN_TO_BE_REPLACED

Spending my game time this week working on capping as many toons as possible.  Since the 100% valor buff goes away on the 10th, I figured it would be a good idea… and even if I can’t do much, I should be able to upgrade weapons for everyone!

Wildstar – sounds interesting but I can’t really spend the money for another game AND the subscription.  Subbing to WoW and SWTOR didn’t work out well [mainly for Star Wars] but it was a one time deal due to the hubby getting a significant bonus just before.  I miss being part of the hoopla but then again, I’ve heard through the grapevine that everything is gated, so I’m not overly interested in playing vanilla again.  I played Vanilla WoW already.  I enjoyed it for what it was and while I have my own concerns about WoW, going back to the beginning isn’t really my ideal either.

We’re back at Garrosh on our raid team and we’re looking promising at this point.  It’s going to take a few weeks but I have confidence we’ll get him soon.

Oh I finished questing all the zones on my Azuremyst 90s 🙂  That netted a pretty good bit of money!  I’m also one toon shy of finishing Glorious! [all the panda mainland rares] which has also netted a fair amount of money and materials.  I’m debating whether I want to put the time of that into offserver alts but I may run a couple of them through… just depends on how long the wait is till the next expansion.

I likes lists… I get things done better and more if I have a list to check stuff off.  So yes, I have a weekly list of raids to run for mogs and things.  And I have a list of goals for before Warlords of Draenor.  [It’s actually the last post!].  I really appreciated the encouraging responses!  I’m glad to know others have their own lists.  I’ve had people tell me that making a list for a game is just silly but I think it’s smart.  It can help your focus in game.  I mean it’s not like I don’t make lists for real life stuff [which is why hubby suggested I make lists for in game].

I hope the alliance chopper wins.  I do have horde toons if the horde one does.  Frankly I think they need to end up putting both in game and not wait on the second one because otherwise you tick off half the base or close to it.  And if they wanted a true vote of which one was “best”, I’d have said you’d put both in game.  I voted alliance because that’s where my main is and that’s where I want another free mount.  Now I prefer the look of the alliance bike too [though I think a front wheel would look better] but I would have voted alliance regardless.  Sorry Horde – I do think your bike looks pretty sweet too.

These are in particular order priority wise.

1. Farm the dinosaur bones for the Bone White Raptor Mount – only got about 300 of them, just need to do a few grindy sessions for it.

2. Finish Archaeology achievements – at least the collect x of this that increment up to 20.  I’d like to do the Pristine one too if possible.

4. Beat the Celestial Tournament and get all the pets from it.

6. Get the Turtle Mount [it’s been on the last two bucket lists with no luck!]

8. Get the drakes from Vortex Pinnacle and Stonecore

9. Get the 55 rep achievement for my bank guild [only a couple short]

10. Clean up the toon quest log and banks before WoD

11. Try and finish out the mog sets that I’m still missing pieces from.w

This is one of the recipes I got from Awesome Restaurant Quality Recipes at Home, though the post is either gone or no longer public or somesuch.   This one was specifically credited to Trina Hansen and Brooklyn Castillo.

1. Brown the ground beef in a large skilled and drain.  Add Worcestershire sauce, ketchup, dried onion, salt and pepper to the beef and simmer for five minutes.

4. Grill wraps for about five minutes until cheese is melted.  Cut on diagonal and serve immediately.

This is definitely kid friendly – our son gobbles them down, though he doesn’t like tomato so we leave that off of his.  It doesn’t seem like the small amount of ingredients you put in the beef would flavor it much but they really do.

1. Brown the ground beef in advance or make the mixture in advance.  We’ve done both and they work just fine with this meal.

2. We don’t actually use an indoor grill [we don’t have one] but we use the broiler on the oven, so it’s like 2 minutes or something]

3. Make sure you don’t overload the tortilla as that’s very easy to do.

4. Although we haven’t tried it, you could add in some chopped pickles [Ven hates them] too but that’s for you to experiment with.  I suppose anything you’d like on a burger you’d likely like on these.

If you have a recipe you’d like to send for us to try and possibly be featured here, feel free to send me a note at Askevar@gmail.com   I’m actually hoping this can turn into a kind of blog recipe swap.

After trading recipes with a couple friends, I got the idea of posting a weekly “Raid Night Friendly” recipe.  It would be something relatively easy to fix that Ven and I have tested.  Very few of the recipes will be our own creations but most of them are not from any cookbook I’ve seen but word of mouth, grapevine or via facebook.  I get a number of my recipes from a facebook group titled “Awesome Restaurant Quality Recipes at Home”.  I’ve had a dud out of there but most of the recipes we’ve tried are absolutely fantastic so I definitely recommend joining that group!

I think I’ll debut the column tomorrow and post it every Friday. 🙂  Friday seems like a good day 🙂

You Yank It, You Tank it: Blog of a Tanking Death Knight Lady
Blog at WordPress.com.
Loading Comments...