These are in particular order priority wise.

1. Farm the dinosaur bones for the Bone White Raptor Mount – only got about 300 of them, just need to do a few grindy sessions for it.

2. Finish Archaeology achievements – at least the collect x of this that increment up to 20.  I’d like to do the Pristine one too if possible.

4. Beat the Celestial Tournament and get all the pets from it.

6. Get the Turtle Mount [it’s been on the last two bucket lists with no luck!]

8. Get the drakes from Vortex Pinnacle and Stonecore

9. Get the 55 rep achievement for my bank guild [only a couple short]

10. Clean up the toon quest log and banks before WoD

11. Try and finish out the mog sets that I’m still missing pieces from.w

So we have a date and it’s 2 months out now…  Knowing that we can count on probably a month and a half before pre-patch drops.  This also throws my “Bucket List” into overdrive and prioritizing.


– Clear out personal bank/sell off items.

Tier 2: If I have time
– Questing on off-server alts in Cata zones

Other Games:
SWTOR: Finish the class questline on Askevar before the sub runs out.

END_OF_DOCUMENT_TOKEN_TO_BE_REPLACED

I know, I know…  Yeah…  3 posts so far in two days and a couple of weeks before that without one… but eh, I have stuff to talk about NOW.

Anyway, I wanted to go ahead and start making that list of ‘things I want done before the next expansion’.  Mainly so I could start working on it 😛

World of Warcraft
*Ogril’a Exalted,
*
*
,
,
*Stormpike Exalted
*Avengers of Hyjal exalted
*Get into PVP a little bit and earn at least a few of those achievements.
*Try to get the Tol’vir pet and mount.
*
*
*
*Try to finish out Shadowmourne…  22/50
*
*
*
*Max out professions on alts on AZM [Leatherworking and ]
*Salty on Askevar [just need the rare fish]
*Turtle mount on Askevar
*Cenarion Molten Core set for Aricaa [have 7 of the 8 pieces]
*Level one of each class on the main account to 85: just need mage – have one at level 79 at the moment
*Clear out my toons banks and guild banks…  make use of void storage for the things I want to keep

If I get really bored, run the rest of my AZM toons through the Cataclysm zones they didn’t finish in while in the leveling process.

Looking at that list and thinking… honestly the only things I expect to get done are the rep grinds and some PVP… not sure I have the fortitude to grind out the archaeology stuff and the fishing achievements.  I probably will make some progress on Shadowmourne but we’ll see.

Other Games:
Finish Diablo 3 on the Barbarian.  Play other classes
Try out Star Trek Online as it’s free 2 play
Play LotRO with Endyme some.

I honestly am not sure I’ll do much with the MoP beta…  The Cataclysm beta left a really bad taste in my mouth because of the poor quality of it… and the fact that every bug I reported was in the release… and the fact that the feedback function was broken for months…  Yeah, was severely not impressed there and it’s kinda to the point of  ‘what is the point?’ if Blizz isn’t going to listen anyway.  I probably will spend a little time in it… but yeah, not too much.

Diablo 3 – if it’s ever released, is something hubby and I will check out.  I seriously doubt we’ll play it long term but as we’re receiving a copy from the annual pass, it’d be a little silly not to check it out.

We’ll see how it goes… for now I’m playing what I feel like as I can and have time :), with WoW being my priority as I’m raiding and raid leading and really enjoying that!

Today I did a little achievementing and ended up with over 11k achievement points…  not that I’ll catch up with hubby but I did close the gap… he’s only a few hundred ahead and that’s because he’s a rep grinding fiend… and I HATE rep grinding.

Anywho, I finished grinding Kurenai [oh the pain] this morning getting diplomat in the process and and therefore bought the 8 mounts they had for me to reach the 100 mounts.

And then this afternoon, a friend of ours was on and he hopped into raid with us and we three manned five bosses in AQ40 and got the rep I needed for Nozdormu.   I was really close anywho, but it was nice to finish!

Next on the plate:

– Exalted with , , , , Ogrilla, , Stormpike, [over time of course – some of these I’m not interested in starting just yet]

– Do more work on Archaeology if I can… ugh.

As the saying goes, “A Picture is Worth 1000 words”.  All the words in the world, couldn’t express my thrill for finishing this.  We lost someone to a valkyr early on, but recovered beautifully… kept pushing it, kept pushing it and suddenly we all fall over dead.

Cue massive screaming and squealing in vent.  We get rezzed, kill Arthas and BAM. 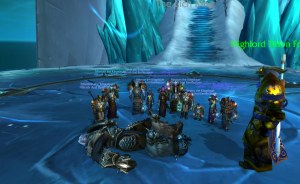 Completed:
Loremaster on my Death knight main [Yay!]
Loremaster on my old main
Various and Sundry other achieves/pets/etc
Rivendare Mount on Askevar
World Explorer for all my toons
Classic Dungeonmaster for all my toons
Champion of the Frozen Wastes on all applicable toons
Stockpile Heirloom chests/shoulders on second account – am working on a few weapons – but not urgent
Exalted With Zandalar – Askevar
Kingslayer – Askevar

Incomplete:
Finish Argent Tournament on my toons [missing 2/10]
Finish up the holiday achievements [I need some luck at Hallow’s End]
Loremaster of Northrend for all my toons [Finished or near on most]
Level the toon that we plan to be our son’s toon [level 27 atm]
Zul’Gurub mounts – running it every reset atm.