Over the holidays the hubby and I have been letting our son play WoW with us.  We have a third account and he’s got a mage on it and a hunter I just finished leveling today [and they both have cele two piece].  He’s only five years old but he’s remarkably astute about some things.  But he’s also given me a little clue into some of the stereotypes I see in LFR.

1. Time Warp popping mage.   My son’s “main” would be his mage I expect.  He tools around on some of the lowbies on the account, and the hunter but most of his small amount of game time is spent on the mage.  He loves the mage because he can make everyone in the group BIG.

2. Summoning of things – He loves dropping the table to feed everyone.  Just about every pull.  He also loves summoning his friends [mirror image] so he can have help.

3. Needing on everything – He’s pretty good about greeding stuff but occasionally he just NEEDS to “get a present” from the boss and will forget and need everything.  That’s not a big deal in Ulduar or ICC.  We just have him trade something if someone else wants it.  And frankly, it’s irrelevant in LFR now but more for LFD.

5. Randomly following a pet around during a fight/not dpsing the boss – there are more interesting things than boss fights!

7. Pulling for the tank – because starting the fight is important and fun!  Besides, he has to drop a flare under the boss and “set them on fire”

9. Trolling the tanks – “I’m sorry daddy, I didn’t mean to press the button and start the fight” [Mimiron].  Next week: “I’m gonna push the button again!”

So… just pretend everyone in LFR is five years old and is just learning to read.  Whole new perspective.  Now he just needs to discover how to turn growl on and Aspect of the Pack on his hunter… 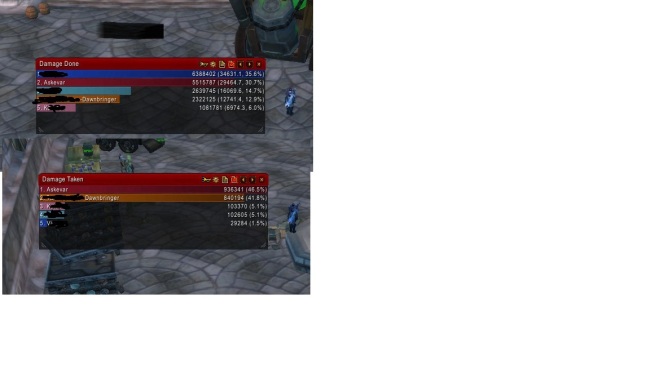 My son is the mage [the blue line].  I’m Askevar [tank] and a friend was healing on his pally [Thanks again Kan!].  I’m not bragging so much on my son’s dps [which did come up by 1k since his foray into the Valentine’s dungeon yesterday] but the fact that he did such a stellar job of staying out of “bad” [and he wasn’t using either the perfume or cologne]B.

My son has killed the Sha of Anger on his gnome mage a few times…  he even has 2 piece tier off Sha and since that’s as much raiding as he’ll be doing… that’s more than he needs.  Yesterday I was grouping for a Sha run on an alt and he sees the bad guy on my screen.

Mini-Ven:  Can I come Mommy?

Me: Sure *sends him an invite*

My son then promptly flew up to where people were gathered near the Sha – all by himself, put out a table and did the mage buff on the raid that was there.  When that table disappeared, he did the same thing again.  He also sat down at one of the banquet tables and ate the food for a buff.  I was very very impressed!  He did all that without my direction meaning he’s listening to my advice when he plays.  The first time he killed the sha with me, he got scared because the guy was soooo much bigger than his gnome that he ran out of the room. Now he’s starting to understand that he’s part of a team and that the team together can do it!

He also asked if he could do the special instance with me this morning [aka the Valentine’s instance].  I’ve never let him queue with other people before but I figured that if I were on Askevar, I could probably pick up any slack [and it IS a holiday boss].  He got a little flustered getting out of the puddles and lost some dps but ended up with 15k overall… which isn’t bad for a four year old on a fire mage where he’s mainly hitting one button [Fireball].  Yeah, I know, that’s not the rotation but he’s four!

Ven and I also occasionally do a scenario with him [yup, I get kicked off my computer to the laptop for it] so he’s learning how to do group content pretty well… though his attention span isn’t super great.  But again – four years old!

Oh, and he’s learned to read a map already.  Anywhere I go in game, he can find me between looking at the terrain on my screen and the maps on his.  As someone who was an anthropology major with quite a few geography classes taken, I approve.

My son was complaining to me that his toon was thirsty and needed to get a drink.  He was out in Borean exploring and I told him that if he went home [Stormwind] that he could talk to the lady in the inn and get a drink for his toon.

So he did the only thing logical in his four year old mind.  He flew back to Valiance keep, walked in the inn, pointed to an npc and said “That’s the lady, right mommy?”

[That’s not actually his toon, but I had to wormhole over and screenshot the NPC for this post].