Well… we’ve been in a few days now 🙂  We got in the second day of early access, in fact [yeah we pre-ordered pretty early on].  It’s intense, but it’s been fabulous!

A bunch of old faces are around – Inq, Kanrad, Mikhaill and Khaella – all of whom follow this blog and most have commented before.  Of course, hubby and I are playing.  We’ve also picked up some of Kanrad’s real life co-workers.  We’re in a guild called “The Nerf Herders”.  I know, it’s probably one of the more overused guild names… we’ve seen at least 2 other variations on our server already.  But we settled on it and we like it 🙂  We’re on Shadow Hand – one of the more popular PVE servers, apparently.  For the last couple of nights we’ve had to wait in 30 minute queue times to get in.  So we start up the game early and either play WoW, or do something else while it sits in queue.

We hit level 10 that first night, got to 12 the second evening and have been steadily working and we’re now sitting at level 18, with our own starships already 🙂  I’ve got a couple of alts in the level 10-11ish range [getting to level 10 is easy once you know the basics… past that is more time consuming.  The altoholic I am, I already have one of each class rolled on our server, though most are still in the level 1-3 range.

But here is my main on SWTOR – Askevar, the Jedi Knight.  She did take the guardian tree [the one capable of tanking].  The most frustrating part at the moment is learning to keep threat…  it’s like starting all over again.  The main problem is that at low levels you have very little in the way of a method of keeping threat.  I did finally get a “presence” and a taunt… so it’s getting better.  We’ve done a couple flashpoints with guildies and some heroic 2s and 4s… so it’s just going to take time there. 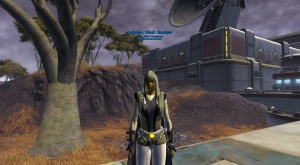 On a further note, we are still not planning to quit WoW.  We did buy the access pass and such and are still raiding on our mains.  We’ll just have to see how multi-gaming works for us.